Indian scientists at the Central Mechanical Engineering Research Institute in Durgapur, India, have come up with a unique solution to the amount of space that a solar system requires - A Solar Tree that can actually compete with more traditional methods of solar installations!

Necessity… the Mother of Invention

The two major issues that prompted the Institute's work on a vertical solar system were the need to increase the use of renewable energy in the country (India is the third largest polluter of the environment behind China and the U.S.), and the scarcity of land for large-scale solar farms. 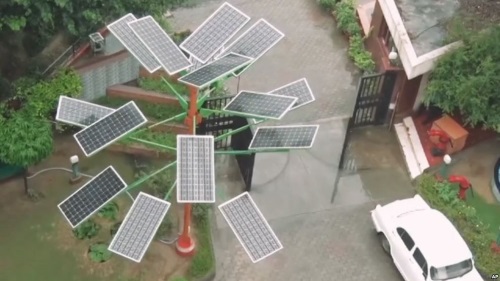 The vertical arrangement of solar panels dramatically reduces the space requirements for a solar system. For example, the Solar Tree designed by the Indian scientists shown above is capable of producing 5 KW of energy while occupying just 4 sq. feet of land. By contrast, a typical 5 KW roof top or ground mount installation using a 250 watt solar panel would require about 400 sq. feet of space - That's 100 times less space!

Another advantage of a Solar Tree is that the panels on the tree can be angled and faced toward the sun for maximum energy production. The Indian scientists estimated a 10% to 15% increase in energy produced over ground-mount and roof-top installations. Add solar tracking capability to the tree, and users could see as much as a 30% increase over a stationery solar system.

Although Solar Trees are not new, this is the first system, of which I am aware, that is capable of producing enough energy to actually offset a significant portion of the average American homeowners electric bill. And, given the new 300 watt-plus 60-cell panels, which are the same size as the 250 watt panels typically installed, the offset is even greater
.
Source:Vishwa Mohan, Times of India, July 22, 2016

SolarWorld 60-Cell Mono Sunmodule
Plus Solar Panels Sale
These high-wattage solar panels are perfect for residential roof top applications. Much easier to handle than the old-fashion 72-cell panels, Lighter in weight (40 lbs vs 55 lbs), have higher efficiency ratings, and are smaller in size measuring in at about 66" x 39" x 1.30" - Basically your standard size solar panel.