Posted by Danny London on 7/23/2018 to What I Learned Today #WILT
Share |
President Donald Trump has imposed a 25 percent tariff on $34 billion of Chinese goods, which prompted Beijing to impose retaliatory tariffs on U.S. imports. The tit-for-tat tariff frenzy is likely to escalate even further after Trump threatened to add more tariffs to $200 billion of Chinese imports including fish sticks, fruit, vegetables and coal. The Chinese government have threatened to take "firm and forceful measures" if Trump follows through on his threat.
Now that the first round of tariffs are in effect, what does the U.S. public think about the situation? Gallup conducted a poll in late June, finding that most Americans consider our trade relations with China to be unfair and support attempts to change trade relations with Beijing. However, a majority of those polled do not consider our trade relations with Canada, the EU and Japan to be unfair, and only a slight majority thought that our trade relations with Mexico are unfair. 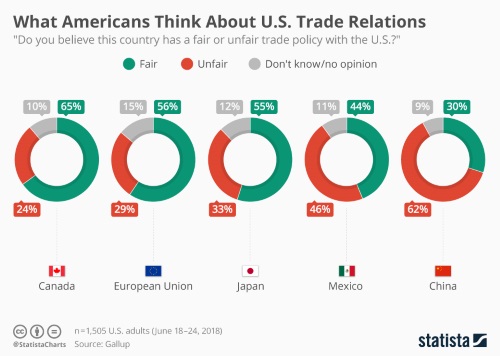 (0)
Your Price: Sold Out
Out of Stock

(0)
Your Price: Sold Out
SOLD OUT
Quick View